Gabriëlskloof Estate is rapidly gaining international recognition for its Landscape Series, a collection of superlative wines that shows the very essence of its vineyards and diversity of the Overberg terroir, with the latest nod of approval coming from respected UK Master of Wine Tim Atkin.

In the 2017 Tim Atkin South Africa Special Report (released today) the maiden Gabriëlskloof Landscape Series Cabernet Franc 2015 not only scored an impressive 96/100 points, but was also named Red Wine Discovery of the Year.

“We are absolutely thrilled with this accolade. The credit for this must go to Gabriëlskloof owner, Bernhard Heyns and general manager, Barry Anderson for having the vision and courage to establish vineyards in this remote corner of the Overberg, 15 years ago,” shares winemaker Peter-Allan Finlayson.

Showcasing a DNA of excellence across all varieties in its Landscape Series – which comprises three red and two white wines, each with particular character and interest – Gabriëlskloof also clinched 95/100 points for the newly released Elodie 2016, an old vine Chenin Blanc stemming from the Swartland.

“Each naturally fermented wine in the Gabriëlskloof Landscape Series is crafted with as little intervention as possible to provide the most authentic and honest portrayal of the vineyards and the best of Gabriëlskloof’s natural heritage,” adds Finlayson.

Made from a single vineyard, the maiden Gabriëlskloof Landscape Series Cabernet Franc 2015 is supple and beautifully integrated with hints of plums, black cherries and just a light pepperiness. 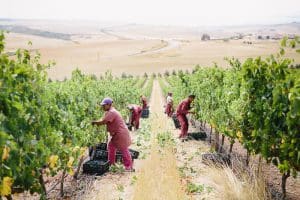 The Gabriëlskloof Landscape Series was launched in 2016 and first in the range was the Magdalena 2015, a blend of old vine Semillon and younger vineyard Sauvignon Blanc and the Elodie 2015. In August this year, this Bot River winery also opened the series’ red wine chapter with the release of its maiden Cabernet Franc 2015 and two Syrahs – Syrah on Sandstone 2015 and Syrah on Shale 2015, each a different expression of their unique terroir. The 2016 vintage of the Landscape Series Magdalena is now also available.

The cellar door price for each of the Landscape Series red wines is R325 per bottle, with the whites selling at R295 each. It can be purchased from the estate’s tasting room, as well as leading restaurants and wine stores across the country.