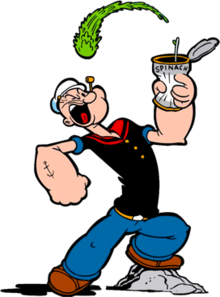 So sang the titular character in the 1960s animated television cartoon series Popeye the Sailor, a rather average little guy who, when he ate a can of spinach, would gain enough superhuman strength to defeat the bad guys. Loved by children the world over, the series was hugely successful in encouraging its young audience to eat the vegetable, thus providing them with essential vitamins and minerals.

Although the cartoon series is no longer around, spinach is still celebrated every year on March 26 with a National Spinach Day, with the aim of promoting the major health benefits of consuming this leafy green vegetable.

Originally from Persia (now modern-day Iran) and known as aspanakh, spinach made its way to China in the 7th century, where the people referred to it as the “Herb of Persia”. It eventually ended up in Spain in the 12th century and around 200 years later found its way into England and France. Spinach is mentioned in the first known English cookbook, The Forme of Cury, which was published in 1390, where it is referred to as ‘spinnedge’ or ‘spynoches’.

Other than Popeye, possibly the most famous person in history to be associated with spinach is the noblewoman, Catherine de Medici, who ruled France in the 16th-century. Originally from Florence in Italy, it is said that Catherine loved spinach so much that she ordered her cooks to serve it at every meal and, because of this, even today, meals that are made with spinach often have the word “Florentine” in the name in honour of her birthplace.

This dark, leafy green vegetable grows in groups and forms a rosette-type shape and is part of the goosefoot family, with its close relatives being Swiss chard, quinoa, beets and morogo which is also known as African spinach.

Not only are there so many delicious ways to enjoy spinach, it also has incredible health benefits, being one of the best sources of iron as well as an excellent source of calcium, folic acid, fibre, protein, calcium and vitamins A, C and K. It is also believed to be loaded with cancer-fighting antioxidants and is said to help improve cardiovascular and gastrointestinal health.

To celebrate National Spinach Day, we asked the chefs from Capsicum Culinary Studio‘s six campuses across the country for their favourite spinach recipes and here’s what they sent us…

Place potatoes in a medium pot and cover with cold salted water. Bring to a boil, reduce heat to medium and simmer until very soft, 15 to 20 minutes. Drain well and return to pot. Stir over medium heat for 1 to 2 minutes to dry out. Mash with a potato masher. In a medium bowl, stir together bread crumbs, garlic powder, pepper and seasoned salt. Whisk in eggs and 1 Tbsp. oil. Stir egg mixture and spinach into potatoes until thoroughly combined. Working in batches, heat 2 Tbsp. oil in a large skillet over medium-high heat until shimmering. Add heaping tablespoons of batter to skillet. Flatten fritters with a spatula and space them so they don’t touch. Cook, flipping once, until golden brown and crisp, 2 to 3 minutes per side. Repeat, adding more oil between batches, until all batter has been used. Drain on paper towels and serve hot.

Method
Blanch the spinach until just cooked 2 – 3 minutes. Drain excess liquid and put into a food processor with the egg and blend until very fine. Make a well in the centre of the flour and add the spinach/egg mixture. Bring the dough together and adjust with water if needed for a smooth dough that is not too soft to pass through the pasta machine. Let the dough rest for about 15 minutes before passing it through the sheet roller of a pasta machine on setting 6.

Ingredients for the filling

Method
Combine the blue cheese, cream cheese, half each of the basil, parsley and oregano and season with black pepper to taste. Place in a piping bag. Place one sheet of pasta down on your work surface and pipe pearls of filling plus minus 2cm apart depending on the shape of the ravioli (I used a medium sized cookie cutter). With a brush gently brush around each blob with water to stick the second sheet of pasta on the top. Shape the ravioli by gently squeezing out the air from around the filling. Once the pasta is sealed use the cookie cutter to cut your shape keeping the filling in the centre.
In rapidly boiling salted water, drop the ravioli, being careful to not overcrowd the pot. When almost cooked the ravioli will rise to the surface and then cook for a further 2 minutes. Remove from the hot liquid and prepare the sauce.

Ingredients for the sauce

Method
Mix the cream with the remaining herbs and bring to the boil and then simmer to reduce by a third. Stir in the parmesan, add the cooked ravioli and roasted capsicum to the sauce and toss to coat. Place the spinach into the pan and coat with sauce so that it wilts under the heat.
To serve, portion the pasta, sauce and veg into bowls. Garnish with fresh basil/ parsley or serve as is.

Method
Pre-heat oven to 180°C
Mix the self-raising flour, salt, baking powder and grated cheese in a bowl and set aside.
In a separate bowl, add the eggs, milk and oil and whisk well to blend before adding the chopped spinach and leek.
Add the wet ingredients to the dry ingredients and combine gently, making sure you don’t over-mix.
Place a tablespoon of batter into a muffin tray prepared and lined with muffin papers.
Finish off by sprinkling the tops with poppy seeds and bake for 25-30 minutes.
Remove and serve with butter while still hot.