The Peninsula All-Suite Hotel was celebrated for their excellence with a Special Recognition General Manager of the Year Award, presented to Chris Godenir during the Tourism Hotel Investment & Networking Conference (THINC) which took place on the 30th to the 31st of August.

Dedicated to the tourism and hospitality sector, the THINC Awards aims to celebrate exceptional industry professionals throughout Africa and honours the top hotels in the industry.

“After many years of developing leadership skills both locally and internationally, I settled in Cape Town with the desire to influence change and new age thinking within the Industry. I feel very honoured to be given this award in recognition and appreciation of the contribution I have made to the Hospitality Industry in Africa by my peers,” said Godenir on receiving this prestigious award.

“I have used The Peninsula as a canvas to develop these concepts that at times could be considered revolutionary.”

Godenir’s new age thinking is evident in his firm belief that real disruption and innovation doesn’t only lie in constructing great spaces but within the service and the people delivering it. Under his management the Moments of Truth campaign was implemented. This initiative, which aims to achieve high levels of team spirit, self-confidence, innovation and independent thinking, has also seen a revenue increase of 56% since its inception in June 2016.

Not only champions in management, the Peninsula leads the way in environmental sustainability which has won them the 2016 RCI Green Award and earning a reputation as the most energy efficient retrofit building in Cape Town confirmed by the Energy Efficient Forum of South Africa.

Candidates for the THINC Award were selected by way of nominations, which were categorised by positioning and rating both qualitative and quantitative measures. An esteemed panel of judges experienced in the hospitality industry rated the hotels and hospitality professionals alike using a detailed ranking system across various criteria.

“Our mission was to bring to the fore the most relevant subject matter, key issues and latest industry trends that shape and transform the future of hospitality businesses in Africa and around the world. This vision is exactly what Mr Godenir is achieving with his business model and we are happy to acknowledge and celebrate these achievements,” says Tim Smith, Managing Partner at HVS a global hospitality consultancy firm and member of the team that conceptualised THINC Africa. 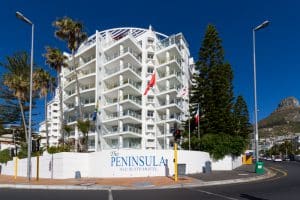 “My goal has been to produce an exceptional business model where investment in people, internal development and empowerment has worked alongside capital investment in sustainable infrastructure. Without the unending support and trust of my Board of Directors, I would have been unable to achieve such great results. A never say die attitude and willingness to adapt and change when required have been my underlying strength,” concluded Godenir.